LUYOR-6100 leak detection fluorescent dye is a concentrated solvent soluble dye containing fluorescent dye in a high flash hydrotreated naphthenic solvent system. The product is a dark colored liquid and has been found to be completely miscible in most petroleum or organic based products. The solvent is used in the product as a viscosity depressant and standardizing agent.

The following recommendations are provided as a starting point for typical applications. Actual dosage will depend on desired color strength as well as background color of the base material.
Hydraulic & Transmission: Fluids 500 to 2000 ppm
Car Engine Oils: 500 ppml
Diesel Engine Oils: 700 to 2000 ppm 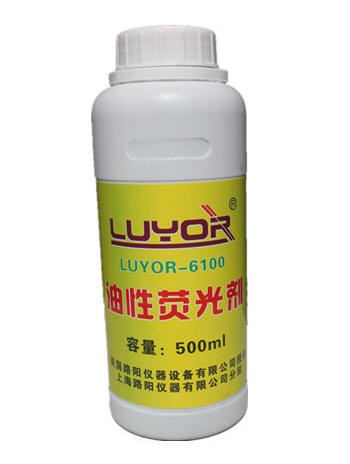 Remarks：Fluid Leak Detection
UV fluorescent additive is mixed with a fluid system, e.g. water, oils, fuels, coolants and refrigerants. The equipment is then operated as normal to allow the fluorescent additive to circulate throughout. Inspection under UV blacklight of all external surfaces, pipework, joints and coils will reveal leaks as a bright fluorescent yellow/green glow. This process can be used for routine quality control or trouble shooting procedures and offers improved probability of fluid leak detection.